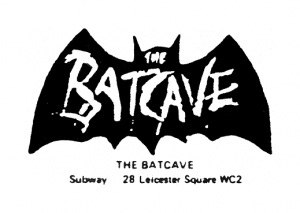 “Look past the slow black rain of a chill night in Soho; Ignore the lures of a thousand neon fire-flies, fall deft to the sighs of street corner sirens— come walk with me between heaven and hell. Here there is a club lost in its own feverish limbo, where sin becomes salvation and only the dark angels tread. For here is a BATCAVE. This screaming legend of blasphemy, Lechery, and Blood persists in the face of adversity. For some the Batcave has become an icon, but for those that know it is an iconoclast, it is the avenging spirit of nightlife's badlands— its shadow looms large over London's demi-Monde: It is a challenge to the false Idol. It Will Endure.”-from the 1983 vinyl record entitled The Batcave: Young Limbs And Numb Hymns

What is the Batcave?

Most Goths have heard of the The Batcave but what exactly was it and why is it such a big deal to the Gothic subculture? The Batcave was essentially the womb for the contemporary Goth subculture which gave birth to a new fashion and music scene. It was a nightclub that was opened by lead singer Ollie Wisdom and his band Specimen in Soho, London in 1982. It wasn't intended to be “Goth” as such but that's the way it turned out and it essentially became the first Goth club.

The Batcave's Mission and Atmosphere

In the lead up to 1982 when the Batcave opened it's doors, interest in the Punk scene was fading. And a host of Horror movies dominated the big screen. There was The Exorcist, The Omen, Halloween, The Wicker Man, Carrie, The Amityville Horror, Friday the 13th, The Evil Dead, The Shining and the Rocky Horror Picture Show. Out of this, The Batcave was born.

The Batcave was created out of a demand for something new, something darker an opposition to the poppy commercial mainstream music and fashion of the time. The idea was to create an art space for the darkly inclined. There wasn't really any particular dress code and no one was denied entry. Its two rules were 'No Funk and No Disco' which set it apart from the norm of club music in the early 80s. It was the first club specifically geared to provide a dance floor for punk, rock, rockabilly, glam, reggae, garage, and psychedelia. Within months of opening, the DJ setlist was being quoted in The Face and Sounds, and the club's soundtrack began to define the spirit of the mid-1980s.

The venue which was scouted by Ollie Wisdom, the lead singer of Specimen, was actually at the Gargoyle club and was a burlesque joint by day and only hosted The Batcave nightclub on Wednesday nights. The club's entrance was could be found by travelling up four floors in a tiny elevator that only carried two people at a time. Then you passed through a coffin-shaped doorway that was made out of a real coffin with the bottom knocked out of it. That lead to a room filled with fog and decorated with cobwebs. 8mm black and white horror movies were played regularly at the club as well as drag cabaret, live music, fire shows and and even mud wrestling. This was an artistic place for like-minded people to get together and create something new. At this time the term “Gothic” was only used sparsely to describe a few bands. Often what we know as Gothic music today was originally referred to as “alternative” or “underground” music.

Yes, the club was dark but it wasn't all candles and gloom as one might think. People were there to have fun. David J of Bauhaus said “It goes against the grain of popular perception, but I remember it being humourous, there was a lot of laughter there. It wasn’t po-faced – it was a laugh, you know?”

The glam-camp band Specimen were hugely influential both musically and stylistically and are credited as being one of the pioneers of the Goth subculture. The band cited Bowies' Ziggy Stardust and Reed's Transformer as their influences. Ian Astbury (the singer for The Cult) described the band's look as “death Bowie”. Specimen's look was very important to the band, perhaps more important than their sound. In fact the lead singer Ollie Wisdom spotted Jonny Slut in the crowd at The Batcave and asked him if he wanted to join the band purely based on his looks. Jonny declined saying that he didn't know how to play any instruments. And Wisdom said that it didn't matter because he had nice hair. So at Wisdom's insistence, he learned to play keyboard. Jonny Slut's striking appearance and fashion sense lead to him become the face of the band and also of The Batcave itself. The band wore black clothes and fish-netting for their tops and bottoms. They used dark makeup on their lips and eyes and had their faces painted deathly white. Black makeup was applied just below their cheek bones to give their cheeks a hollowed out look. Jonny Slut had a very large black spiky deathhawk with strands of hair deliberately falling over his face. For jewellery they wore chains, crosses and silver. Their look was a mixture of fetish, Punk, gore and androgyny. I'm guessing here, but it looks to me like the fashion for The Batcave was heavily influenced by The Rocky Horror Picture Show which was released in 1975. Another influence besides David Bowie was Adam of Adam and the Ants who also lined his eyes and the hollows of his cheeks with black and used white makeup on his face.

Nik Fiend of the band Alien Sex Fiend was also a fashion icon and integral feature of The Batcave. While Jonny Slut's look was freaky, he was quite handsome and so pulled off a sort of sexy/freaky look. Nik Fiend however, was just downright scary looking. He looked like a very frightening zombie that you didn't want to mess with. Fiend came to be at The Batcave by invitation from Olli Wisdom who read a review about his band and thought they sounded like they the sort of people they wanted to play at the club. Apart from often playing with his band at The Batcave, Fiend also DJed there, managed the club's props and managed the whole club when Specimen were away in America.

The resident DJ for the club's peak period was Hamish MacDonald of the band Sexbeat. He was perhaps responsible for playing the music which became known as Goth. The playlist was originally comprised of punk, post-punk, reggae, glam rock and new wave but gradually became more Goth. The bands on the initial playlist were Bowie, Iggy Pop, T Rex, The Sex Pistols, The Clash, The Cramps, The Ramones and Jimi Hendrix to name a few.

Nik Fiend remembers being there when a Sex Pistols track was played and that the dance floor cleared when it came on, which he took as a sign that the people there had moved on from punk and were looking for something new and different. Between 1983 and 1984 The Batcave was playing bands such as the Virgin Prunes, Bauhaus, the Cramps, Sisters of Mercy, Siouxsie and the Banshees, Killing Joke, Xmal Deutchland and of course the host band Specimen and Alien Sex Fiend as the leading act. I imagine the DJ set was influenced by the clubs regulars which included musicians such as Bauhaus, Robert Smith, Siouxsie Sioux, Steven Severin, Nik Fiend, Foetus, Marc Almond and Nick Cave. DJ Hamish MacDonald said in 1984 that the club-goers wanted music they could dance to which influenced the music he played, out went in the older glam rock and in came bands like The Cocteau Twins.

The Batcave became more and more popular and attracted loads of media attention after the club was featured on the BBC TV show “Riverside” in their Halloween special. In the publicising of this new fashion sense and the new music that was coming out of the Batcave, it looked very much like the formation of a new subculture. The term “Gothic” was used by the press to describe the club goers and bands of The Batcave. Although this term was rejected by many of the bands, such as The Cure who thought the whole romanticising of death thing that was going on at the club was stupid and that the music there was awful. He would have no doubt then been annoyed that his music was played at this “Goth club” regularly.

The club also produced a couple of compilation records entitled Young Limbs And Numb Hymns and The Whip. These were intended to be anthems for The Batcave. They included music from Specimen, Sexbeat, Alien Sex Fiend, Meat of Youth, Test Dept. and more. Young Limbs And Numb Hymns is the more popular of the two records and reached #3 on the British independent charts in 1983.

With the success of their records and publicity, The Batcave went on to tour around England. And then America wanted in on the act as well. So in 1983, The Batcave took to New York's Danceteria for one night, Friday May 13th. Specimen, Sexbeat and The Batcave's DJ Hamish (also a member of Sexbeat) were all there. As well as taking the Batcave to America, American bands came to play at the Batcave in London. One such band was Christian Death.

The Batcave became a great success in a very short period of time but the success was short lived. Between 1984 and 1985 – The Batcave became a place for spectators to go and goggle at the freaks and the popularity of the club waned. They ended up downsizing the club and moving back into there original smaller venue. In mid-1985, the Batcave closed its doors for ever.

Today the legacy of The Batcave lives on in name, music and fashion. Eastern Europeans use the term “Batcaver” to describe fans of the original gothic rock music at The Batcave and also to refer to gothic music with a prominent post-punk sound and spooky atmospheres. You can see the influence of Jonny Slut and other Batcavers on the fashion of those in the Trad Goth and Deathrock scenes. And you can see a bit of Alien Sex Fiend and Jonny Slut's influence on the look of the German Industrial band Das Ich.

Many of the original Batcave bands are still touring to this day. Some of these bands include Siouxie and the Banshees, The Cure, Specimen and Alien Sex Fiend.