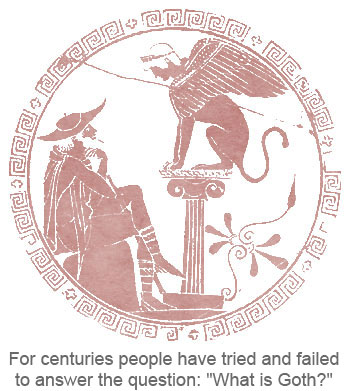 Put simply, a Goth is someone who finds beauty in things others consider dark. They love all that is dark and mysterious. That doesn't mean Goths are evil, it just means they have a different perspective to many. And it also doesn't mean Goths are unkind, violent or lacking in humour, in fact quite the opposite is true. Goths love to laugh but their humour is more of the black comedy sort. They aren't sad because they like dark things - dark things make them happy and inspire them. Goths are often intelligent, romantic and artistic realists. Being Goth is not about how one dresses. Most of what you can find written about Goth is that it was something that was born out of the Punk movement in the late 70’s and that most Goths wear black. I disagree. Goth isn’t something that was created in the 70’s because it always was but it is when the term "Gothic" came about to discribe the new bands that came about then.

There isn't a colour code to Goth fashion and Goths definitely don’t always wear black. A Pastel Goth's heart is as dark as a Goth's who wears all black. Goths also don’t all listen to the same bands. Goth music comes in a wide variety of genres from Goth Pop to Neo-Classical to Goth Folk etc. They do not worship Satan and aren’t members of a cult. Goths can be found around the globe and come from many different backgrounds and ethnicities. The Goth culture is very big in Japan and Germany.

Like every group, what they like and do varies from individual to individual. Having said that, Goths all have one thing in common…that they find beauty in what others consider dark. For example, I have always found dead trees beautiful and instead of having crushes on the good guys in films I tended towards the dark characters that seemed powerful, had deep booming voices and dark music always seemed to be playing when they were shown on screen (Darth Vader, Ra in Stargate). I always loved the dark music that I only heard in movie soundtracks as a child. You see, Goth to me isn’t something that one becomes but something one is.

I had never heard of Goth until one day when I was 14. I used to go into this record store and pick out CDs that I thought I would like based on the cover art (usually darker imagery). I never got what I was truly looking for…something dark/sombre and I definitely wasn't looking for Heavy Metal. Finally one day I gave up and decided to ask the manager for help. I explained my dilemma and he knew exactly what I wanted. He looked at me as if he thought “Ah, you’re one of those.” and said that I should to go to their other store. I did just that and found a heaven that I never knew existed. A world where I knew I belonged. Goth music and Goth magazines….nearly brought me to tears of joy. I had finally found everything I loved and knew what I was.

Goth is not a phase. It is something that you either are or aren't. I don't understand people who say "Oh, I used to be Goth." Maybe they used to play the part to fit in for a while - but it isn't something you grow out of! One doesn't just change their likes and dislikes over night. I certainly have never changed who I fundamentally am.

I will attempt to describe what Goth is and what Goth isn’t. I will describe fashion, music, films and more that many Goth people like throughout this website. I intend this website to be a resource for Goths and non-Goths alike. I am creating the website that I always wished there was, with descriptions, lots of pictures, videos and links.

As there are many Goth bands, movies and Goth is even a part of the world of high fashion and graces the runways...many people like Goth things and don't even realise that they are Goth. Please keep in mind as you are reading through this site that Goths are individual people and what each Goth likes varies. 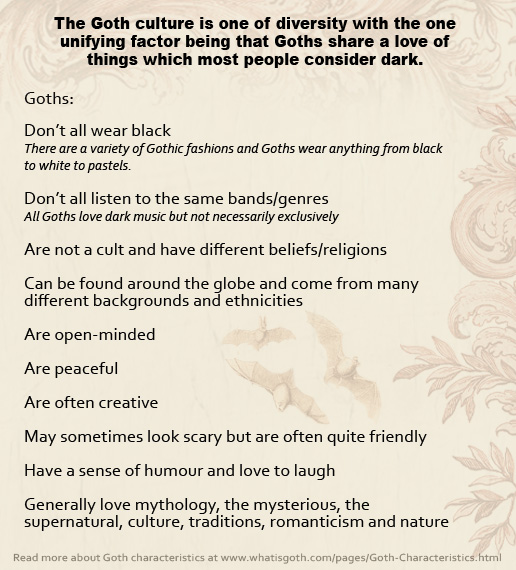 Steampunk is a sub-genre of Goth. It is a mix of Victorian and Edwardian aesthetics combined with modern technology. It is a re-invented future or a past that never happened. In many ways society has taken a nose-dive since the Victorian era and some would even go so far as to say we have been living in a New Dark Ages ever since. Science has done a lot for us over the past century, including creating the internet and enabling me to publish this website. However, the scientific view of humans as soulless bio-machines hasn't necessarily been of great benefit to the way we treat each other and it can cultivate a "who cares what I do mentality". Steampunks are trying to pretend that whilst technology has progressed, aesthetics and morality have remained unchanged.

Imagine a society with highly developed technology that evolved slightly different to how society actually did. A society that kept steam and the the pride of creating beautiful, well-made, long-lasting things that were used in every day life from machines to fashion. People of this society enjoy their technology and take great pride in everything that they make. Imagine a world without plastic and with people who actually enjoy learning and creating! Too bad society didn't turn out this way, but perhaps Steampunks can turn it around. Steampunks and Goths would be considered to be weird geeks by many people of today who don't question society's throw-away mentality.

What does Punk have to do with it and where did the term Goth come from?

That’s a good question. Everything and nothing. Everyone says that Goth evolved from Punk in the 70s. Why might that be? The popularity of Punk started waning probably around the late 70s and a few Punk bands dissolved and formed new bands with new looks and a dark theatrical rock sound. The music was different but the band members had a Punk background. Imagine someone who is in a Jazz band who leaves that band and joins a Country band….would you then call the Country band Jazz? Of course you wouldn’t. That being said, some of these new bands were labelled Positive Punks (Posi-Punk).

Punk had a rebellious anti-conformist attitude towards society and therefore the word Punk become synonymous with rebellion. Goths and Steampunks do not so much rebel against society but sort of ignore it and have formed their own society. Yet, they are influenced by modern society in an artistic sense in that the art, music and fashion of the Goth culture reflects the horrors of modern society. So punks might have reacted to society with anger and violence while Goths will peacefully paint you a picture to show you what they think of society.

How did the Goth subculture get its name? 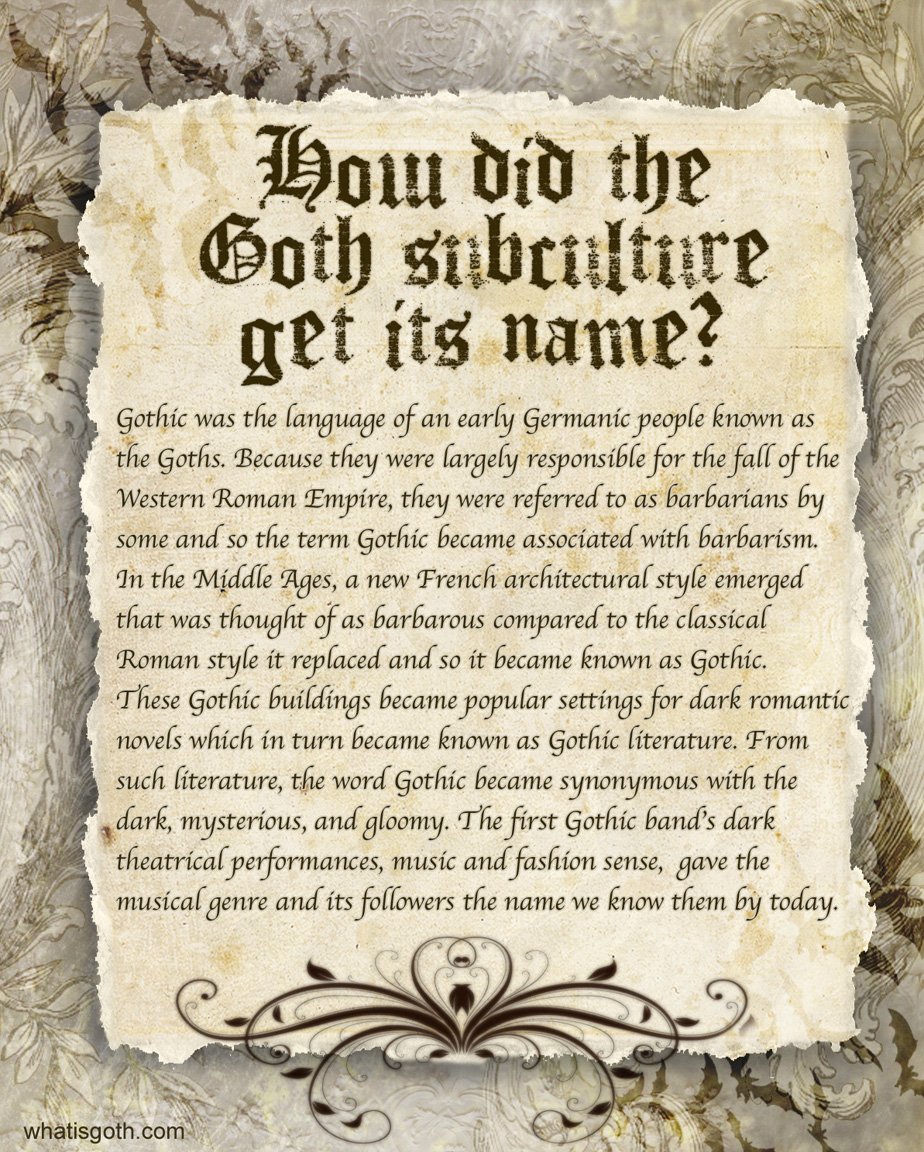 Who were the first Gothic bands?

Musicians who initially shaped the aesthetics and musical conventions of gothic rock include Marc Bolan, the Velvet Underground, the Doors, David Bowie, Brian Eno, Iggy Pop and the Sex Pistols. Journalist Kurt Loder wrote that the song "All Tomorrow's Parties" by the Velvet Underground is a "mesmerizing gothic-rock masterpiece".

Critic John Stickney used the term "gothic rock" to describe the music of the Doors in October 1967, in a review published in The Williams Record. Stickney wrote that the band met the journalists "in the gloomy vaulted wine cellar of the Delmonico hotel, the perfect room to honor the gothic rock of the Doors".

Nico's 1969 album The Marble Index is sometimes described as "the first Goth album". With its stark sound, somber lyrics, and Nico's deliberate change in her look, the album became a crucial music and visual prototype for the gothic rock movement.

Black Sabbath's 1969 debut album created a dark sound different from other bands at the time and has been called the first ever "Goth-rock" record (Baddeley 2002: 264).

In the late 1970s, the word "gothic" was used to describe the atmosphere of post-punk bands like Siouxsie and the Banshees, Magazine and Joy Division. In a live review about a Siouxsie and the Banshees' concert in July 1978, critic Nick Kent wrote that concerning their performance, "parallels and comparisons can now be drawn with gothic rock architects like the Doors and, certainly, early Velvet Underground".

With the birth of this new music came the birth of a new fashion that was borrowed from the punk look and given a darker edge. But Goth fashion hasn't just borrowed from the Punks. There are many different styles influenced by fashions of earlier eras...but you can read more about that on the fashion page. But this was just the birth of modern Goth music and fashion and not what Goth is. After all Goth is just beauty that is found in the darker things in life. Dark music has been around since music began and so have people who have found beauty in darkness. Who can honestly say that Carl Orff’s O Fortuna, which is often mistakenly called Carmina Burana (circa 1935) and the poem Gloomy Sunday that was originally written by the Hungarian László Jávor and made famous by the singer Billie Holliday are not everything that Goth is? The songs of Hildegard of Bingen (born 1098) are very similar sounding to some contemporary Goth songs by the band This Ascension and even Qntal. As for early Goth people, how about Edgar Allan Poe, Charles Addams, Edward Gorey and perhaps even the virgin Queen Elizabeth I? The Goth band Faith and the Muse have brought one of Elizabeth’s songs to life in the song entitled "Importune Me No More". Her father Henry VIII also wrote the very haunting song "Greensleeves". Lorenna McKennitt sings a nice version of this song. So Goth has always existed but the music, fashion and people weren't labelled Goth until about the late 60s.

The Batcave Nightclub - The Womb for the Gothic Subculture

Most Goths have heard of the The Batcave but what exactly was it why is it such a big deal to the Gothic subculture? The Batcave was essentially the womb for the contemporary Goth subculture which gave birth to a new fashion and music scene. It was a nightclub that was opened by lead singer Ollie Wisdom and his band Specimen in Soho, London in 1982. It wasn't intended to be “Goth” as such but that's the way it turned out and it essentially became the first Goth club. Read more about The Batcave

Links to other’s opinions about what Goth is and more: